Have you remembered to update your RSS feed?

Too Young to be Grumpy has moved!

Too Young To Be Grumpy is Moving!

The main reason for changing over is that I had originally thought of Grumpy as being a place I could rant on about stuff without worrying who I might offend. As it turns out I haven't ranted on much at all and still it's pretty easy to find out who I am, so I decided to go all out and come clean and move the blog to my own website where I have much more control than simplistic Blogger will allow me.

I have to say I'm mightily impressed with Wordpress - it's incredibly easy to set up and has tons of features that Blogger can only dream about. I will be leaving the old Blogger blog where it is, so all it's archives will still be available. It's a shame to have to leave that 7 months of my life all behind on another server, but 2006 beckons and it is wonderful to have so much more control.

Now I've come clean, I also hope to have more pics and videos. I love the videos PigSty does.

I hope those readers who have followed Grumpy will continue to do so at the new address which is:

If you're using an RSS reader, update your RSS feed to this:
http://david.dupplaw.me.uk/tooyoungtobegrumpy/?feed=rss2


Hope to see you all in the new location!

Hello to you all!

I hope you had a great Christmas, and thankyou for the messages. We got back from Wales on Tuesday evening and went up my parents' to have yet another Christmas morning, followed by a rather nice St.Stephens Pie made by my mother. This is a Ham, Turkey and white wine sauce pie with a nice topping of baked mash potato. Lovely.

Since then, Daisy and I have mostly stayed in and kept away from the chilly weather outside. However, I did have to nip down to Maplin to get a TV fly lead for my new TV card for my computer. I wish we hadn't, because the car parks at the retail park were choka-block with shoppers (the bastards!). It took us 45 minutes to get out of the car park!

Anyway, very little's going on - just huddled away - me in my new slippers and dressing gown, and Daisy's busy overcoming the post-Christmas crash with some online retail therapy.

We've been making a bunch of plans for next year. We've decided to get some chickens, and we really need to get out and get some horse poo into our vegetable patches. I've also got to get on and get my businesses going - because otherwise we're going to have nothing ready come next October when we want to move back to Wales. 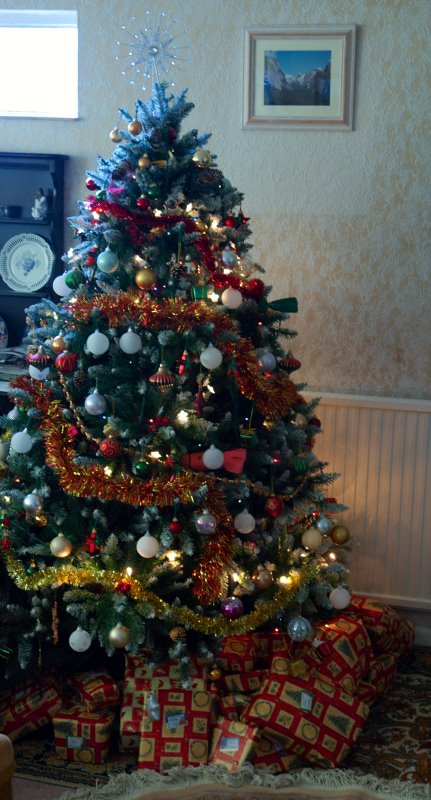 Our tree and pressies

Daisy and I are off to Wales tonight and we're up there for the Christmas period until the day after Boxing Day. So, I thought I ought to do this before I forget and wish you all:

It's 4 o'clock and the light goes on because it's nearly too dark to see myself type. Today's the Winter Solstice and the shortest day. The Earth is at the furthest point in its orbit around the Sun and we're also pointing the other way. From here on in, the Earth gets closer and we can peer over the horizon and see the Sun getting higher into the sky - before we know it, it will be Summer.

We got back from Wales late Monday evening, having had a fairly relaxing weekend there, after a trip to Morriston Hospital for Mother-in-Law to have a cancerous growth to be removed from her face (which all went very well indeed). Because waiting hours are between 2 and 8pm at the hospital, Daisy and I scooted off Friday morning had a nice lunch and went to the beach. It meant I actually got a few photos taken! I have been fiddling about with making some panoramas because last week I found a very clever program called Autostitch which takes a bunch of photos and makes a panorama from them without any input at all. Here's some of the results:

This one is of the place where my Nan used to live in the hills around Bridgend. My Dad actually helped build both of these houses! This photo is a composite of 3 photos (these taken on a Canon S45):

This one is a spectacular view that you get from just down the road from the above houses. The weather was creating some really amazing views. This photo is a composite of 14 photos (!) (all other photos taken on a Nikon D70).

The pot of gold was clearly at this person's house (click to see bigger): 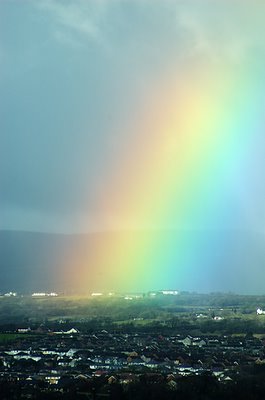 We also went over to Ogmore-by-Sea and had a short walk along the beach. Here's a couple of photos (click them to see them bigger): 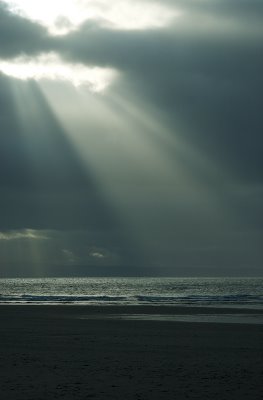 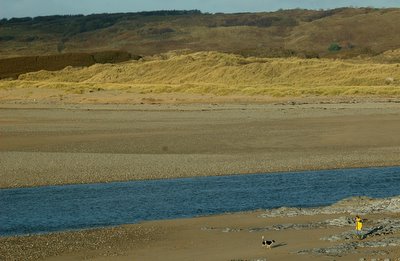 All three of us did very little else all weekend - just lounged around, watching telly and reading magazines. I did manage to do a little big of Christmas shopping which means I've nearly finished now. Yay! There's still some things in the post, but I'm sure they'll arrive in time now :o)

We're back off up to Wales on Thursday, this time for the big day on Sunday. We'll be coming back on Tuesday and having another Christmas Day then with my parents who live not far from us.

Hope you have a happy day!

Oh dear. Looks like Daisy and I have been incredibly negligent over the updating of this recently, haven't we? Apologies to all. It's the usual run up to Christmas that's causing it all. 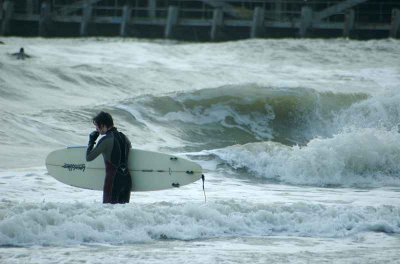 I should've mentioned that we went to a craft fair at the Bournemouth International Centre (BIC) and met up with Daisy's Dad and his wife. We looked around the fair, which was a bit dull to be honest, and then headed to Harry Ramsden's for a nice lunch. Daisy and I walked along the beach and enjoyed the antics of the surfers trying to catch a wave or two.

I should've mentioned that the other day I had to have a new windscreen fitted into my car. On the way to work a stone jumped up from the back of a lorry I was overtaking. The bang gave me quite a fright, but there was no visible damage until a few days later when a creeping snake of a crack began to make its way up the window. Eventually it almost reached the top and with my MOT approaching I decided to get it changed. A nice man came along and put it in for me, relieving me of £100ish. 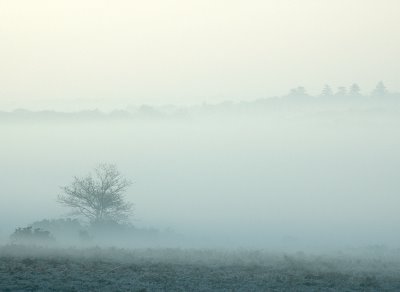 I should've mentioned that Daisy and I have been walking in the New Forest a few times too. It's mainly to provide fodder for my photoblog, although it also makes a nice change to sitting in front of the computer [or even having a lie in!]

I should've mentioned lots, but I didn't and now I've forgotten most of it.

Christmas is approaching fast or as Daisy just put it:

Christmas is coming
and we are getting fat
We eat too many takeaways
and we don't have a cat...

hmm... but I've managed to pack all the pressies I've got, although the online retailers I've used are being a bit cack this year. Amazon, in particular. I ordered some stuff on the 1st December, and it's estimated delivery date is 23rd December. As we're spending Christmas in Wales this year and I will have already left by then, those pressies will have to wait until afterwards :o( A belated Christmas party. Amazon aren't the only one's either. Dabs are estimating a ridiculous delivery date too.

Tomorrow is my last day at work. Tomorrow evening we're off up to Wales for the weekend, although we'll be back down as Daisy still has to work next week. I should hopefully get the last few things I want to get for Daisy then, and a week Friday we're back off up to Wales. Seems very busy! At least all this travelling will be even more fodder for my photoblog.

Gawd, uploading photos to blogger is a pain in the bum. Anyway, this entry is a bit photo heavy. Hope you're not on dial-up! Just a few snaps from our wonderful holiday in Japan in November 2004. 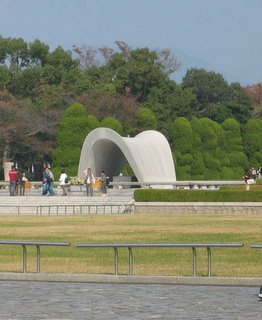 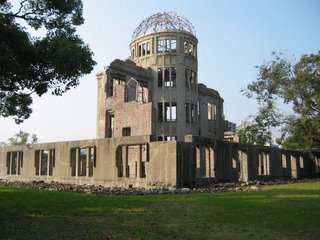 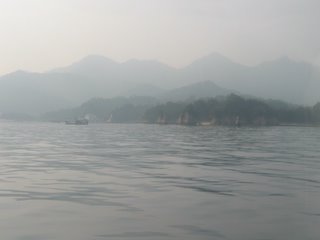 Miyajima Island in the early morning mist (well, not that early. About 9 am) 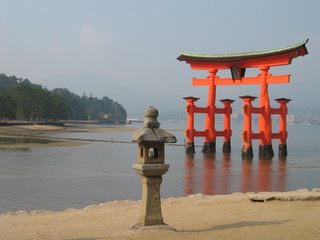 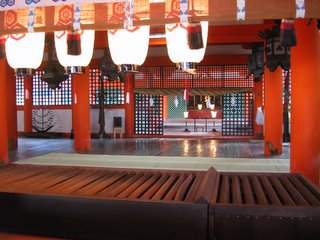 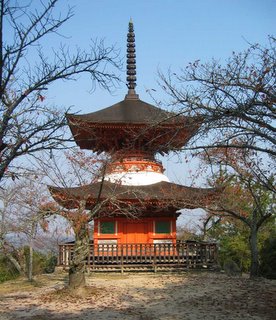 A pagoda on the island (duh!) 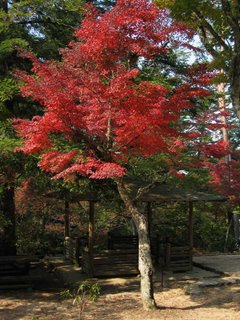 It's a Japanese tradition to go out and admire the changing Autumn colours and it even has it's own name: Momijigari. The island was swarming with Japanese OAPs on day trips when I was there. 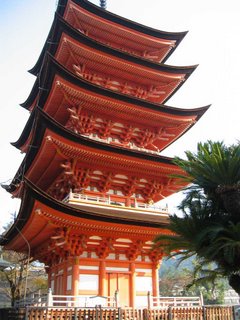 A tall pagoda this time. 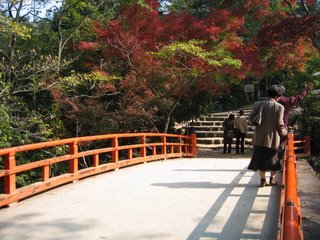 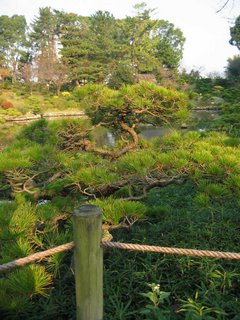 The following day we found this traditional little garden (thanks to the Lonely Planet Guidebook!) hidden away amongst all the city skyscrapers. 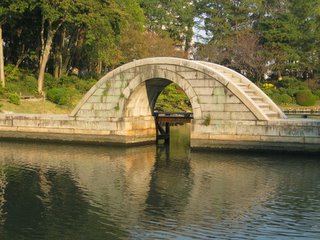 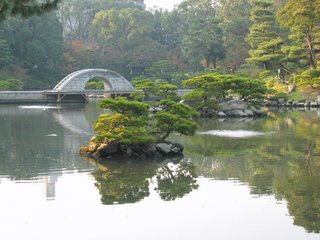 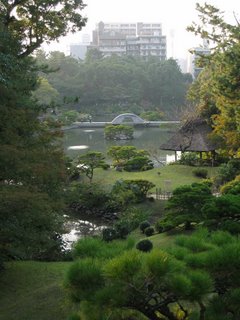